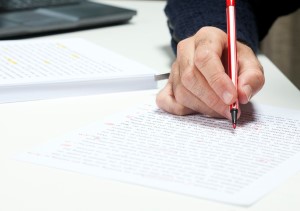 Indeed, print is all-pervasive. The printing industry in the UK has an annual turnover of billions of pounds. And, yet, the vast majority of people have no concept of the process by which printed material is produced.

This in itself does not matter, but what is more worrying is that many of the people who are involved in the preparation of these materials are not aware of the correct way to markup proofs so that corrections are made correctly. This is in spite of the fact that there has been a British standard for this for many years.

BS 5261 was first published in 1976 and then revised in 2005. This British standard, a part of the BS 5261 series, specifies marks for use in copy preparation and proof correction. It shows how to the customer (or editor) should markup copy and proofs for the typesetter. A card showing these marks has been one of BSI’s bestselling products for some time.

The marks specified were chosen to be relevant to the needs of all users of the standard and to reflect good trade practice. They were intended to be clear, memorable, and quick and easy to reproduce, so no words, abbreviations and contractions are used as marginal marks. In other words, the marks are international and not only understandable in one language.

However, things have changed significantly since 2005. Very few texts are marked up for typesetting as users’ or authors’ files are used in most cases.

Therefore, based on the marks in BS 5261, an international standard was developed (ISO 5776) was developed within ISO Technical Committee TC130 and published in 2016. This has been adopted by BSI as a British standard and will, in due course, replace BS 5261.

So, what is new in the international standard, three main things:

• It includes not only alphabetical languages, but also the logographic languages Chinese and Japanese. The standard is currently being revised to also include Korean. (The revised British standard – BS 5216 (date to be confirmed)– based on ISO 5776 will only include the alphabetic marks.)

• The proof correction marks are given in more detail than in BS 5261 and the marks themselves are printed in red to distinguish them from the text being corrected (unlike BS 5261, which is all in black)

The changes do mean, however, that the tables of correction marks are more extensive than those in BS 5261 and how best to make these available is under discussion with BSI.

There have been several approaches to making proof correction marks available using software and it is encouraging to note that the ISO technical committee responsible for the PDF specification has agreed in principle for facilities for the implementation of the proof correction marks to be included in the next version of the PDF specification. However, not only is this probably several years away, but it will also require a software developer to implement it in a product. In the meantime, the use of the stamp facility in PDF to markup digital proofs works very well; as this example demonstrates. Although this implementation still uses the BS 5261 marks, it could easily be updated to use the ISO 5766 marks, most of which are the same since the international standard was based on the British standard.

So, while BS 5261 continues to meet the needs of many professional proof-readers, for this new to this, the international standard provides a much clearer explanation of each proof mark. Adoption of these marks should make production of printed material both more efficient and more accurate.