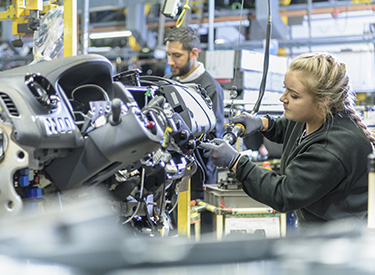 Remanufacturing is one of the sectors selected for Outcome 2 of the UK-China Business Environment Programme Standards Strand: improvement in the quality of standards submitted to international standards-setting bodies.

As there are currently no international standards for remanufacturing, one of the main aims is to submit new proposals to ISO and to set up a new international area for the work such as a new committee or sub-committee. By working with China to improve the quality of common standards for remanufacturing, we hope to stimulate the industry, creating opportunities for new businesses and new employment in the sector.

Remanufacturing standards in the China context

China has a large potential to lead in remanufacturing, for the following reasons:

Remanufacturing standards in the UK context

The UK Government has invested significant resources in developing the remanufacturing technologies industry within the UK. There are opportunities for the UK remanufacturing industry both in terms of provision of services (consulting and knowledge transfer) and remanufactured products.

The Department for Business, Energy and Industry Strategy (BEIS) have previously been involved in UK-China initiatives on remanufacturing (2016-2017), DEFRA has indicated its interest via its latest strategy, and this area would fit well with UK’s Industrial Strategy, clean growth and digitalized “intelligent manufacturing”. Both the UK and China have indicated a mutual interest in this field.

The All-Party Parliamentary Sustainable Resource Group report on remanufacturing in the UK estimated that the value of remanufacturing is £2.4 billion, with the potential to increase to £5.6 billion alongside the creation of thousands of skilled jobs.

This report was followed up with the publication of a second, more expansive report, entitled: ‘Triple Win: The social, economic and environmental case for remanufacturing’ (APSRG, 2014). This report provided a more detailed examination of the potential of remanufacturing in the UK and made explicit recommendations, to both government and industry, on how the UK can build remanufacturing to become sustainable.

The APSRG reports indicate strong support across government to advance remanufacturing in the UK. Furthermore, the launch (in January 2015) of the Scottish Institute for Remanufacturing provides a model for creating a coherent UK-wide initiative.

Process for joint development of proposals for international adoption

There are clear linkages to Sustainable Development Goal SDG 8 – Decent Work and Economic Growth, and to SDG 12 – Responsible Consumption and Production.

Stay up to date with the latest news and updates