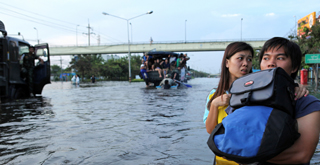 Natural disasters of varying types occur all over the world, leaving in their wake broken links in a network of intertwined global supply chains. One such natural disaster, the floods in southern Thailand in 2011, caused major factories to close, costing billions of dollars in damage and putting over 600,000 people temporarily out of work. The impact on the global supply chain was cataclysmic. Thailand is the second largest producer of hard disk drives, which is a critical component in computers. When its factories were forced to close, it caused a massive interruption in computer manufacturers’ supply chains for months.

Also in 2011, the Tohoku earthquake and tsunami cost Japan an estimated $210 billion. While the effects of the quake were felt as far away as Norway, the impact on global supply chains was even more widespread. As a major manufacturer of electronics, automobiles, and various automobile components, coupled with ‘just-in-time’ inventory practices, the earthquake caused ripples throughout the auto industry for months.

Natural disasters strike with seemingly little warning, however, the risk of such occurrences is predictable. Knowing the likelihood of such scenarios allows companies to mitigate the natural disasters risks by creating redundancy and resilience within their supply chain. An effective business continuity management (BCM) plan for the supply chain enables an organization to rebound operations quickly, ensure responsiveness to a disruption, and protect brand and reputation.

Using BSI’s SCM and SCREEN solutions, you can analyze and quantify the likelihood of natural disasters that have the potential to cause substantial disruptions to the supply chain and business operations in a given country.