2017 has been possibly the busiest year so far in my 20 years at BSI. We started off with January being assessed by UKAS for Notified Body activities to the PPE Regulation (EU) 2016/425 which we then in March became accredited and became a Notified Body to in April with an extensive scope – the first in the UK and one of the first in Europe! Following this, BSI issued its first pre-dated Module B certificates in the summer to four of our clients, Scott Safety, 3M, JSP Ltd and Centurion Safety Products by our CEO Howard Kerr at our Milton Keynes office. Again the first for PPE Notified Bodies in the UK and certainly one of the first in the Europe to do this. 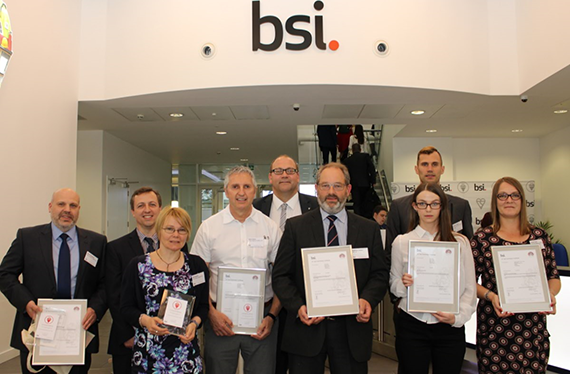 We’ve been keeping up the seminars in 2017 which we started in 2016 with one day events taking place globally including Tokyo, the US and of course our Centre of Excellence in Hemel Hempstead, UK. We’ve also partnered up with BSI Construction and Medical Devices certification teams where PPE is also used; we’ve been giving PPE Regulation updates at their events and seminars across the UK and Ireland as well as events at the NEC in Birmingham. In total we have presented in front of over 350 people this year.

BSI has increased its testing capability in 2017 with the opening of its own Gas Capacity Laboratory on 4October by local MP, Mike Penning. This means BSI can now test organic and inorganic gases and vapours, acidic gases and ammonia and organic ammonia derivatives in-house. We’re looking to increase the scope of this laboratory in 2018 and our developments in the PPE area. More to come – watch this space!

Late October this year, we exhibited and attended A+A Trade Fair in Düsseldorf. It was a great opportunity to meet up with colleagues, clients and friends from across the world in the same place. The stand was buzzing and we had a really busy four days; it was also great to have some excellent support from our regional BSI colleagues – we had representatives from the BSI offices is Germany, The Netherlands, Italy, China and Turkey and was a great team effort by all.

We’ve also had a huge increase in the number of standards we have PPE Kitemark schemes for. Watch out for a future announcement on this in 2018, but we have some new schemes we can offer and we’ve added around 50 standards to our scope. These include new schemes such as fall arrest, clothing and gloves, as well as the resurrection of some older schemes that we ran in the past such as footwear. As I said there will be a bigger announcement on this in 2018!

2018 is looking to be a very busy year too with the implementation of the PPE Regulation in April we are expecting to be working closely with manufacturers to help provide as smooth transition as possible during this big industry change.

Finally I’d just like to say thanks for your support in 2017 and we look forward working with you in 2018.

For more information about Personal Protective Equipment, please use the link below.