The value of the Kitemark in fighting CO poisoning

Carbon Monoxide (chemical symbol "CO") is an odourless, tasteless, colourless gas, which is popularly referred to as the "silent killer" due to it having these properties whilst also being toxic to humans in quite low concentrations. Not to be confused with its much less harmful (in this context) relative, Carbon Dioxide (CO2), carbon monoxide can be produced in pretty much any combustion process that burns a carbon-based substance (or "fossil fuel") - including natural gas, LPG, oil, petrol, wood, charcoal...it's a long list.

CO is believed to be responsible for the deaths of around 50 people a year in the UK, while many more may have narrow escapes, as the symptoms of low-level CO poisoning can be similar to the flu. Most of these deaths relate to the use of solid fuel appliances such as log burners, and this led to the UK government introducing new legislation in 2015 that required private landlords to install a working CO alarm in all rented properties that include solid fuel heating.

A domestic CO alarm is designed to be a life-saving device that alerts householders to the presence of this toxic gas, so that they may evacuate and/or take some other preventative action to address the source of CO - it's not a device that will necessarily protect people from any possible health effects that may arise from longer-term exposure to low levels of CO. This is why the main advice is always that the first stage of protection should be to reduce the risk of CO exposure by:

In conjunction with these measures, a CO alarm can provide an additional level of safety in the event that something goes wrong. However, a number of recent reports (West Sussex and Prosafe) and related articles in trade press appear to cast doubt on the effectiveness of CO alarms, so I thought it would be a good idea to look at these reports in more detail and provide a clearer explanation of what is being reported.

To understand the significance of the failures being reported, it's first necessary to see how CO alarms are tested in an accredited laboratory like BSI's facility based at Loughborough University. Alarms are tested against the European Standard EN 50291-1 by exposing them to four test gases ranging from 30ppm to 300ppm, and then noting how long it takes the alarm to respond in each case. The requirements are summarised in the graphic below. 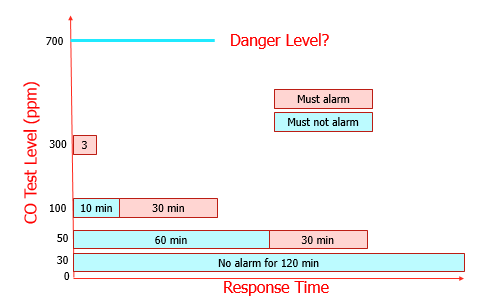 For the lowest concentration gases, the alarm is not allowed to respond for a period (to prevent routine "false alarms" which might stop people trusting the device). For the highest concentration (300ppm), an alarm is required to sound within three minutes. A compliant alarm is required to comply with these response times at extremes of battery voltage, operating temperature and humidity, so it's an extremely thorough and demanding testing regime that most reputable alarms are designed to pass.

Both of the reports referred to above show that some alarms tested failed to comply with the standard, but they provide little detail into how and why the alarms failed – even after a freedom of information request, West Sussex council refused to tell me about their test results. The Prosafe report is more open and clearly states in its introduction that "products that were sampled from the markets… by experienced market surveillance inspectors that were looking for noncompliant and potentially unsafe products" and "they do not give a statistically valid picture of the market situation", so maybe it's not a surprise that these alarms failed to comply?

Independent consumer champion 'Which?' recently completed a test programme on CO alarms purchased from the UK market – they concluded that "Consumers need to be aware that there are dodgy detectors on the market and should only buy products bearing the BSI Kitemark."

BSI is a leading certification body for CO alarms and the Kitemark affixed to an alarm shows that BSI has independently:

In all large-scale studies I have been involved with (such as the Prosafe one), alarms that have been through a rigorous independent certification process (such as BSI's Kitemark) generally perform much better than those that have not.

So, in summary, CO alarms do work, and they are a useful tool in the fight against CO poisoning. Choose an alarm from a reputable supplier and one that has been independently certified (and that does not just include a 'CE Mark' by itself), install and maintain it in accordance with its instructions, and replace it well before the expiry date that will be marked on it.

There is a great resource at www.carbonmonoxide.ie showing a summary of CO alarms that have been recalled from the marketplace and announced on the EU's RAPEX website.

For more information on BSI's testing capabilities surrounding CO alarms, the Kitemark, or to speak to a member of our team, please email us on product.certification@bsigroup.com 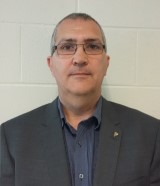 For more information about the Kitemark and its benefits, please use the link below.