The pharmaceutical industry faces several impactful supply chain-related challenges. Foremost, and most visible, is the outright theft of pharmaceuticals, typically while in transit. Based on available data, the top countries for pharmaceutical theft are the United Kingdom, the United States, Mexico, Italy, and India. Thieves overwhelmingly strike the trucks moving pharmaceutical products globally, with the trucking modality targeted in almost three-fourths of thefts recorded by BSI. The techniques involved in stealing pharmaceuticals vary, but the most common tactic is stealing from trucks by surreptitiously or overtly accessing the payload, a method which accounts for nearly one-third of thefts, followed by hijacking and theft from a facility.

Alongside outright theft, the pharmaceutical industry, as well as many governments, are facing another multi-layered challenge of growing concern in the form of diversion to gray and black markets that can arise online or through other difficult-to-detect channels. Many legitimately manufactured pharmaceuticals that are targeted and stolen are typically taken to other marketplaces where the medication is either very scarce or more expensive and then sold at a discount, essentially artificially manipulating the marketplace through the gray and black markets. 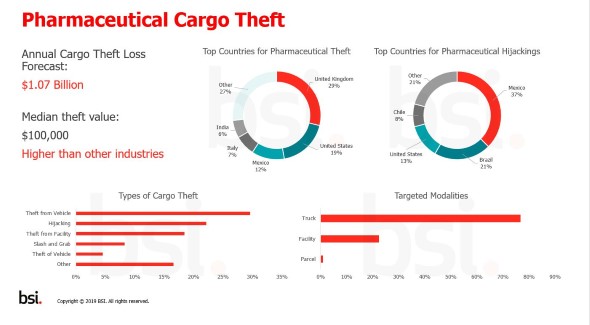 This phenomenon of diversion is coupled with rising concerns of pharmaceutical products that are not made to quality and safety standards. There are several methods of counterfeiting pharmaceuticals, such as when suppliers either do not include the required amount of active ingredients, do not include the active ingredient at all, include potentially harmful ingredients like plastics, or cut other corners in various stages of manufacturing. Whether acquired by theft or counterfeiting, the distribution of the pharmaceuticals then often takes place through difficult-to-trace channels, such as online pharmacies.

A recently-dismantled illegal online pharmaceutical ring highlights the threat that online pharmacies can pose to markets and consumers alike. Beginning in approximately 2012, five Argentinian men sold controlled substances, including oxycodone, hydrocodone, tapentadol, and diazepam online to individuals in the United States. The men hired an American website developer to create several webpages for their illegal online pharmacy, paying a commission based on how much income was collected from said webpages. Sources indicate that the pharmaceuticals were not obtained through theft; rather, the ring purchased them from locations in Romania and India. BSI has previously identified India as a country of concern for pharmaceutical fraud, with organizations at times selling medications containing potentially dangerous materials or lacking the purported active ingredients. While it is unclear if the drugs in this case were of insufficient quality or contained dangerous materials, the criminal organization illegally sold over $6.7 million worth of the Romanian- and Indian-made medications to customers in the United States. Online pharmacies are attractive to both malicious actors as well as legitimate, if unaware, customers, particularly in areas where pharmaceuticals such as those mentioned above become expensive or scarce.

Learn how BSI can help your organization address current and future vulnerabilities within your supply chain, fill out the contact form and we'll contact you directly.

Published by: SCREEN Intelligence Team - Our dedicated team monitors and analyzes a wide range of geographic risk and incident data sources to produce risk ratings for 25 proprietary risk indicators for 203 countries. Our team is constantly updating and refining our intelligence, making sure our risk ratings reflect the situation on the ground.

If you have a topic you'd like to hear about and think your peers would too, please feel free to email us with your ideas.