The apparel industry faces numerous supply chain-related challenges, ranging from warding against cargo theft to vigilantly combating counterfeiting. However, few challenges are more salient than ensuring a supply chain devoid of labor exploitation. Corporate social responsibility is critical to any business’ reputation and brand. Given the ongoing linkages of human trafficking, mass migration, and labor exploitation, companies must continue to be vigilant in vetting suppliers in their supply chain, examining legal protections for labor in the countries they do business, and ensuring that any risk of forced labor or child labor is identified and rooted out.

Our recent annual report, Supply Chain Risk Insights, highlights the ongoing risks posed by mass migration to global supply chains, primarily labor exploitation.  Approximately half of all corporate social responsibility (CSR) incidents recorded by BSI last year involved migrants. As we discuss in the report, BSI noted several geographical factors that can be used to assess the risk that migrant labor exploitation will be used in legitimate supply chains. The obvious factor is whether a country has a large population of migrants or lies along one of the primary migration routes (see below). BSI has determined that economic and civil unrest in neighboring regions is frequently associated with informal or unlicensed recruitment and employment of migrants. 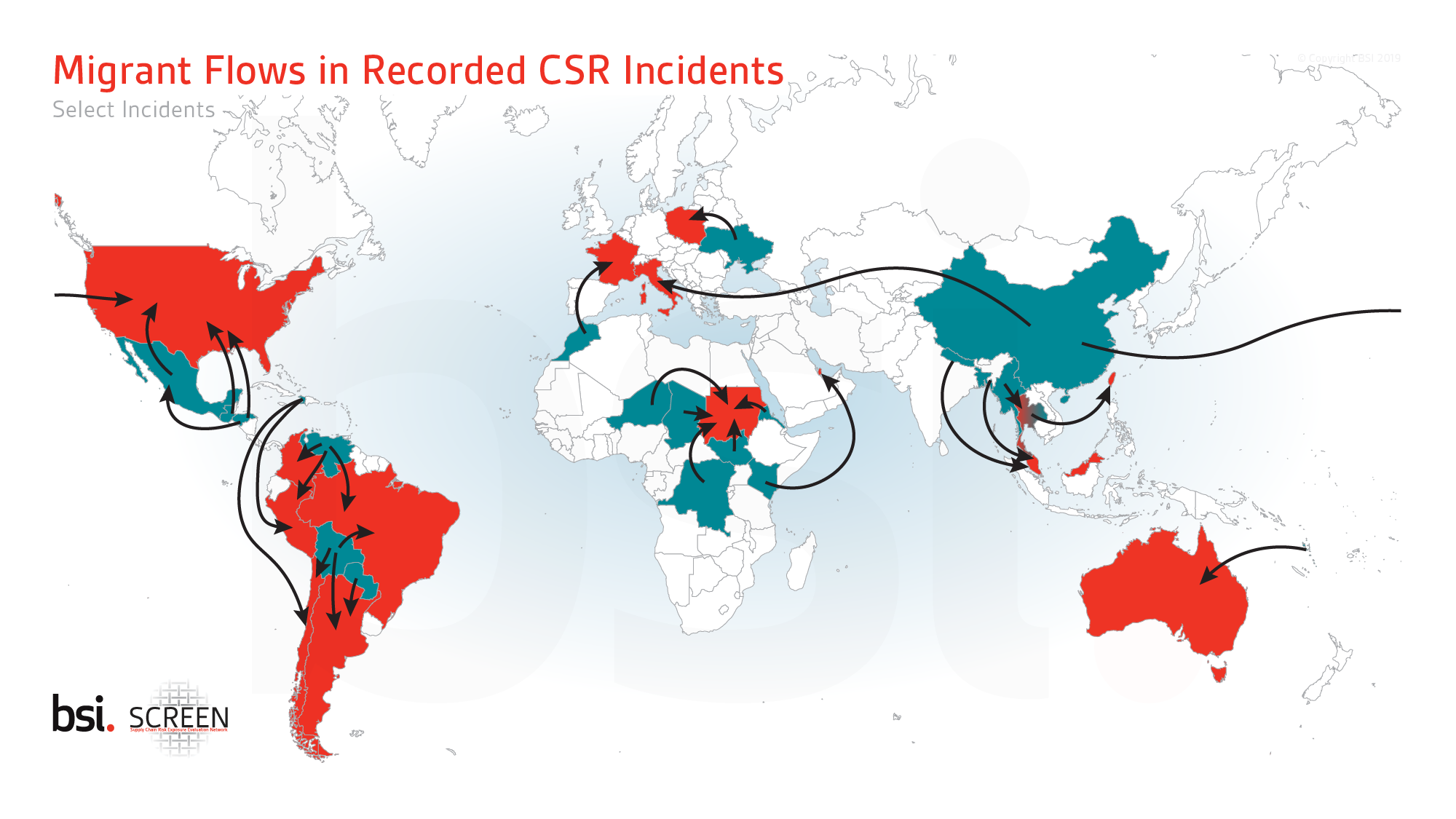 Another influential factor is the absence of legal protections and official citizenship status for migrants in host countries, which can prevent victims from lodging complaints through official channels. As we discuss in Supply Chain Risk Insights, some countries around the world have taken note of these increasing risks to migrants, and labor exploitation generally, and have either enacted or are formulating new legislation to combat the issue. The Qatari government, for example, lifted a provision that previously required migrant laborers to obtain permission from their employers before being allowed to leave the country. Elsewhere, Australia passed its own Modern Slavery Act while Canada iterated a commitment to creating similar legislation. Other countries, however, are regressing in their ability to address labor exploitation. Brazil is one such country, where budget cuts are jeopardizing significant progress in combatting issues like forced labor by resulting in less resources available to carry out inspections. The Brazilian government also attempted to change the legal definition of forced labor to a more generalized statement that would have likely prevented authorities from rescuing some victims as they were no longer in situations legally classified.

The agriculture and garment industries are especially vulnerable to employing exploited labor. In the first few months of 2019, numerous rescues occurred globally, liberating workers on farms and in textile factories. In February, South African officials rescued 100 workers, originating in Swaziland and Lesotho, from a small unventilated room allegedly acting as a textile factory. Also, in Vietnam, police rescued several children who worked in local garment factories while their parents labored in agriculture; recruiters reportedly paid the parents a fee in exchange for hiring their children. In Brazil, officials report rescuing over 1,900 women from forced labor over the past 15 years, many of which were involved in the global fashion industry.

Mapping and understanding the risks associated with the geography of a supply chain, although no simple undertaking, is a critical step in managing the risk of labor exploitation. Other methods such as supplier training and transitioning business partners into a recruitment model in which an employer pays fees associated with immigration can also help combat the risk of labor exploitation, an issue that BSI believes will likely remain a key issue for supply chains in 2019.

Five men from Cyprus and Bangladesh were arrested for human trafficking and forced labor. The men are accused of luring people to Cyprus with the intent of becoming a student or domestic worker, but instead forced to work on farms or in fields for low wages. One man claims he paid the men to bring him to Cyprus to become a barber but was forced to work on a farm in Orounta.

Police in Devon, England arrested four men on Friday after they received reports of a group of people getting into the back of a van after arriving on a boat. 29 Vietnamese nationals, including children, were found in the van and are currently receiving temporary care and accommodation. The men are being charged with human trafficking and assisting illegal immigration. Vietnam is a major source for labor trafficking.

Police in Indonesia arrested eight suspects in connection with a human trafficking operation. The ring was unprecedented in scale, trafficking more than 1200 victims to Morocco, Turkey, Syria, and Saudi Arabia since 2014. Most victims were to work as domestic helpers, and incidents of sexual abuse were prevalent. Often, women in Indonesia are forced into labor recruitment agencies by family members or to repay debts. Migrant workers often lack proper documentation and are vulnerable to exploitation.

According to the Labor Ministry in Brazil, officials in the state of Maranhão rescued the highest number of female victims of forced labor in the country over the last 15 years, with a total of 313 rescued. The International Labor Organization (ILO) reported that female victims of forced labor most often work in the global fashion supply chain. Over the last 15 years, Brazilian officials rescued a total of 1,936 women from forced labor.

Police in Ky Son District, Vietnam rescued several children who were reportedly on the way to work at area garment companies. Officials indicated the children, all under the age of 16, went to work while their parents labored in agriculture. Labor recruiters reportedly paid the parents a fee in exchange for hiring their children.

Lawmakers in the United Kingdom’s parliament recently called for the strengthening of anti-slavery laws after a probe of the country’s fashion industry points to weaknesses in verification. During the probe, the government contacted 17,000 companies reminding them of their obligation to provide the government with statements detailing how their companies are addressing the threat of slave labor within their supply chains. However, one non-governmental organization representative noted that the law does not require verification of the statements, and that many statements do not provide information indicating sufficient actions in order to ensure slave labor is not present in their supply chains.

Officials in Newcastle, located in KwaZulu-Natal, South Africa, discovered 100 workers from Swaziland and Lesotho locked in a small unventilated room that allegedly acted as a textile factory. Authorities also suspect that the employers were not providing lawful wages and subjected the workers to excessive hours.

The National Registry of Rural Workers and Employers (RENATRE) conducted 100 audits in various Argentine provinces and detected two cases of child labor and a case of human trafficking involving 14 workers. The cases of child labor occurred in northern Córdoba and central Buenos Aires. Auditors also found 14 victims of human trafficking in the center of Buenos Aires, where inspectors found poor housing conditions, a lack of work clothes and protection gear, unhygienic conditions, a lack of drinking water, and the insufficient payment of salaries.

Learn how BSI can help your organization address current and future vulnerabilities within your supply chain, fill out the contact form and we'll contact you directly.

If you have a topic you'd like to hear about and think your peers would too, please feel free to email us with your ideas.