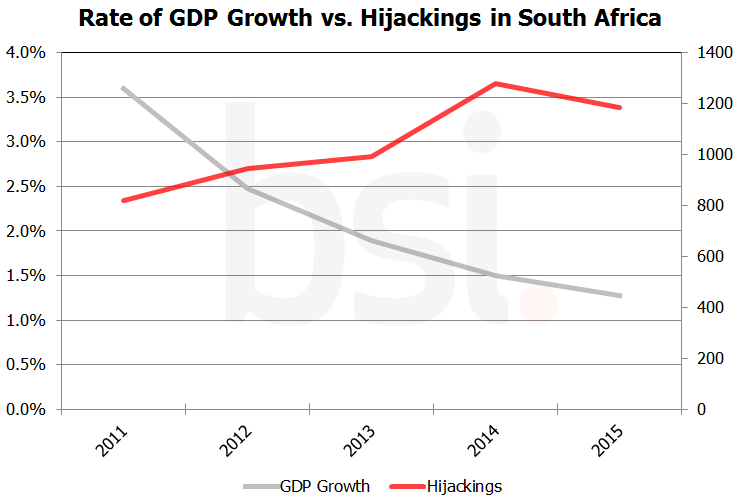 New enforcement actions by the South African Police Service (SAPS) have likely contributed to a drop in cargo truck hijackings in the country, although the total number of hijacking incidents remains at a concerning level. BSI analysis of recently released SAPS crime statistics, which cover the period between April 2015 and March 2016, indicates that the number of hijackings during the period (1,184) dropped seven percent compared to the previous year’s figure (1,279). The geographic distribution of incidents largely followed typical patterns, with Gauteng Province accounting for the most by far (695), followed by Mpumalanga (194), KwaZulu-Natal (71), and Free State (65).

Most notably, the creation of a dedicated anti-truck hijacking task force likely played a role toward curbing the number of hijacking incidents in the country in 2015. SAPS’s national commissioner approved the task force last July following a series of hijackings of trucks carrying cigarettes. The force is active in Gauteng and other high-risk provinces for hijackings, and officials indicate its operations are guided by criminal intelligence collection. The 2015-16 statistics highlight the force’s likely role in addressing the hijacking problem in the case of Gauteng Province, which saw a 14-percent drop in incidents and in Free State, where hijacking numbers dropped 27 percent.

Despite the reduction from the previous year, the cargo truck hijacking figure for 2015 remains at a very concerning level. In 2014, the highest number of hijackings occurred since the 2008-2009 period, which each witnessed over 1,400 incidents. Furthermore, last year’s numbers remain 44 percent higher than the 821 incidents recorded in 2011, the lowest number seen over the past decade. Notably, BSI has continued to record recent incidents involving violent cargo theft tactics against escorted shipments following a series of such cases last year, underlining the serious cargo theft environment in the country despite the overall drop in hijacking numbers.

Typhoon Malakas made landfall in Tanabe Wakayama prefecture after pouring heavy rain on the southernmost islands of Kyushu and Shikoku earlier. Kyushu prefecture has lost power services to over 114,000 households. This region is still recovering from deadly quakes in April. One city in Miyazaki prefecture has seen a record 578 millimeters of rain in only 24 hours, leaving cars partly submerged in the muddy rainwater. Japan's Meteorological Agency predicts continuing torrential rain and storm surges will affect eastern Japan on September 21. The storm already disrupted air and railway transportation and road traffic mainly in the southwestern prefectures. Major airlines have cancelled 180 flights in total. BSI will continue to closely monitor further business disruption as Typhoon Malakas moves toward Tokyo, the global business hub.

Authorities at the Port of Santos, Brazil Announce Record-Breaking Amount of Cocaine Seized in 2016 So Far

Authorities at the Port of Santos, Brazil have seized more than six tonnes of cocaine in 2016 so far, a record-breaking amount that already represents six times the amount of cocaine seized at the facility last year. Officials mostly seized the cocaine this year from sea container shipments of goods including agricultural products and construction materials intended for European countries. Customs officers attribute the higher volume of seizures to improved risk management and increased use of technology-based cargo scanning methods.

Assailants attacked a cargo truck convoy at a road block in Kilembwe, a remote village in the eastern Democratic Republic of the Congo (DRC). The trucks had delivered fuel and mining equipment to a gold mine operated by a Canadian company and were returning to Tanzania when they were stopped. The attackers seized at least 26 drivers but kidnapped only 13 of the workers who were specifically foreign nationals from Kenya and Tanzania. The assailants also set fire to six cargo trucks. The Congolese army launched an offensive and rescued the kidnapped drivers. A logistics firm subcontracting to the mining company suspended truck movements on the route for about six days due to the incident.