Several thousand workers employed at a factory producing eyeglasses in the Huanggekeng area of Shenzhen, in the southern Chinese province of Guangdong, launched a strike yesterday, demonstrating outside of the facility. The workers launched the strike to protest what they claim was an unfair compensation package offered by their employer for a plan to relocate the factory to the Pingdi area of the city, about seven miles away from the current site. The factory is a wholly owned subsidiary of a Hong Kong-based optical products company that employs a total of about 6,000 workers. Thousands of workers employed at the factory launched a previous strike in March to protest over their pay and benefits.

China suffers from an Elevated threat of man-made disruptions such as strikes, and workers employed at factories in the country regularly carry out labor actions. The recent strike represents a relatively major incident, involving a significant number of participating workers. Last year, only six percent of all factory strikes in China involved more than 1,000 participants. The southern province of Guangdong, home to some of the country’s largest industrial areas, usually sees the largest number of labor strikes in the country annually. 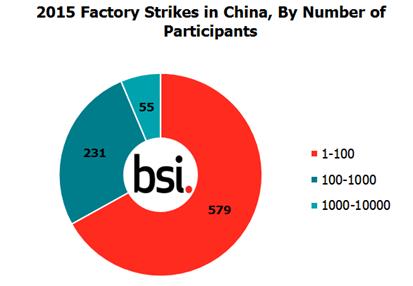 Heavy rainfall over the past week triggered flooding and landslides that caused significant infrastructural damage in several states in northeastern India. Floods and land movements during and in the lead-up to India’s summer monsoon season often interrupt the continuity of business operations in affected areas, especially in remote regions like the northeast, highlighting the potential for disruptions to trade or cargo transport following the recent rains. Rising waters severely damaged buildings in Mon district in the state of Nagaland, while two major landslides in Arunachal Pradesh State caused significant damage to a village in Phamla and killed at least 18 people. The districts of Lakhimpur, Jorhat, Sivsagar, and Dima Hasao in Assam State are currently experiencing severe flooding and landslides that affected almost 43,000 people, underscoring the significant scale of the recent weather events. Forecasters also warn of additional thunderstorms over parts of Assam and Nagaland over at least the next two days, underlining the continued possibility of supply chain interruptions in the near term.

At least 15 thieves assaulted a warehouse belonging to a cargo transportation company in Quilicura, located in Santiago Metropolitan Region, Chile, and stole about $747,250 of various goods, primarily cosmetics. According to reports, the thieves assaulted an on-site guard to gain access to the facility and then took three other guards hostage, binding the men’s hands and feet. The thieves then began inspecting the cargo loaded in trucks at the facility, consolidating certain goods, particularly cosmetics, into two cargo trucks. The thieves then left the facility with the two cargo trucks and four guards, which they held hostage for a short duration before eventually abandoning them at a metro station inside the city. Police managed to locate and recover one of the stolen cargo trucks empty of the cargo it was carrying in Codegua, located about 54 miles south of Quilicura.

A demonstration in the Egyptian capital, Cairo, today involving hundreds of protesters turned violent, as demonstrators clashed with security forces in a public square in Dokki District, about a mile east of the city’s center. Officials deployed thousands of police officers and soldiers along Cairo’s ring road highway, in the downtown area, and in public squares across the city earlier today in preparation for the planned demonstrations. Authorities blocked would-be protesters from congregating in some instances. Police reportedly fired tear gas and shotgun rounds in an attempt to disperse the demonstrators in Dokki, though it remains unclear if any casualties occurred.

Most of the unrest today appears to have occurred in public places that are not major thoroughfares for freight transport in Cairo. As is common in Egypt, however, the chance remains for protest situations to evolve rapidly, highlighting the potential for demonstrations or security blockades to interrupt the movement of some transported goods. The deployment of officers along the ring road in particular underscores potential concerns for disruptions to road freight moving into or out of Egypt’s capital. Today’s protest in Cairo is the second to occur this month over the government’s recent transfer of control of two islands to Saudi Arabia.