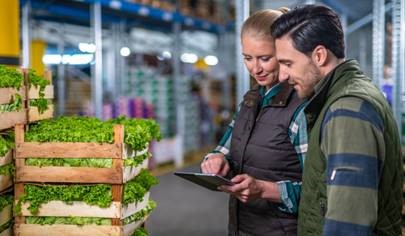 The world, as a global food community, is more aware than ever of the impact that food waste has on our planet and people. Underlining its significance, the UN seeks to halve global food waste per capita at retail and consumer levels by 2030, and to reduce food losses along production and supply chains (UN Sustainable Development Goal 12.3).

So, what is the food sector doing about food waste? In the UK, organizations are already taking impressive steps to reach these targets. This activity is grouped broadly under three areas, supply chains, technology, and redistribution; we’ll take a closer look at each.

Initiatives such as the Courtauld Commitment 2025, launched by WRAP in 2015, are helping to significantly reduce food loss in supply chains – an area that contributes to around 30% of the UK’s total food waste (2.9 million tonnes). Courtauld 2025 brings together different working groups from the food industry to solve specific challenges, and its signatories and supporters include industry leaders such as Associated British Foods, Nestle, Ocado and Unilever.

Courtauld 2025 provides a collaborative forum for the industry to discuss and tackle food waste by neutralizing the competitive atmosphere that can underpin one-to-one relationships between brands and retailers. This approach has already delivered tangible results; between 2015-18, action by Courtauld 2025 signatories helped to reduce UK supply chain food waste by 4% per capita [1].

Another success story of reducing waste in the supply chain comes from ASDA. Following research, WRAP identified that fresh potato is one of the most wasted vegetables in the UK, at an estimated value of £48 million per year [2]. WRAP worked with 14 growers in ASDA’s supply chain to reduce this. The use of real-time visual imagery and data from commercial crops provided a forecast for harvesting, resulting in an increased crop yield and less wastage by allowing growers to improve their supply and demand planning [3]. This is just one example of technology’s big role in reducing supply chain losses.

Making use of smart technology

For businesses looking for new ways to reduce food waste, the use of smarter technology could be the answer. From smart farming using GPS to grow crops in the most efficient way while reducing the need for pesticides, to digital tracking systems and eco-friendly packaging, technology can make a huge contribution to reducing waste and reducing environmental impacts.

One example is how global organization Winnow helped IKEA to reduce their food waste by 50% in the UK through digital monitoring. An AI system captures and records food as it’s thrown away and generates a daily wastage report. This automation not only reduces manual reporting by employees, it’s helping to change the conversation and culture around food waste in IKEA’s commercial kitchens [4].

Emerging insect technologies also have huge potential to design out food waste by reusing resources. The UK Government’s Industrial Strategy Fund has allocated £10 million to start-up Entocycle to build the UK’s first industrial-scale insect farm. This will farm the black soldier fly – a master of bioconversion that can convert vast quantities of organic waste into high-quality protein with minimal carbon footprint. Whilst consumer uptake of insect-based protein may be slow, it has already gained acceptance as an eco-friendlier animal feed [5].

Redistributing food to where it’s needed most

With global hunger on the rise, making the best use possible of surplus food is hugely important. FareShare, the UK’s largest food charity, redistributes food by collecting edible surplus directly from food businesses and delivering it to 11,000 frontline charities and community groups. By working closely with companies across the food chain, from farmers and manufacturers to retailers like Tesco, Asda and Waitrose, FareShare redistributed enough food to provide over 56 million meals in the last financial year alone.

Deliveroo, the UK’s fastest-growing food delivery company, has joined this effort. By using its network of partners including Co-op and Pret A Manger, Deliveroo has been able to collect unsold and donated food across London and deliver it to the Felix Project – a London-based food charity helping to fight hunger and food waste. Deliveroo has now set up a dedicated delivery unit within the company with the purpose of delivering food to vulnerable groups, as well as frontline workers such as those in the UK’s National Health Service (NHS) [6].

BSI as a facilitator for change in the food industry

At BSI, we engage with industries, businesses and governments to create consensus-based solutions that define what ‘good’ looks like. Through our work with organizations driving change in the food industry, we’ve created standards that address the industry’s shifting landscape and support ways of positively impacting our planet and people. For example, our guide to responsible innovation (PAS 440) has been implemented by biotechnology startup MiAlgae. MiAlgae produces omega-3-rich algae using co-products from the whiskey industry, thus addressing food waste and providing an omega-3 source that doesn’t rely on depleting fish stocks [7].

Our collaboration with the food industry has also led to fast-track standards such as the guide to protecting and defending food and drink from deliberate attack (PAS 96) and a new document on the criteria to define 100% plant-based foods (PAS 224).

Is your organization responding to change in the food industry?

Find out how developing a fast-track standard could move your market forwards and put you at the forefront of the food industry.

See our brochure for an in-depth look at how the food industry is responding to food waste and what more needs to be done.