New Delhi, November 28 2018: Dalmia Bharat Limited has become the first Indian cement company and globally one of the first few to have imbibed ISO 26000 guidance (the international standard for Social Responsibility guidelines) in its CSR processes and also has brought out its CSR report on these guidelines. 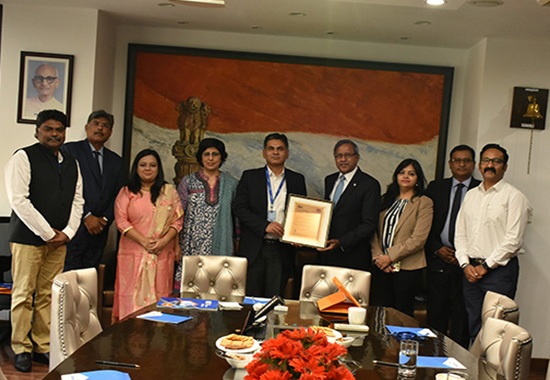 Mr. Gautam Dalmia, Managing Director, Dalmia Bharat Limited released the CSR report on 27th November 2018 at New Delhi for the period of 2015- 2017. Speaking on the occasion, he said that when any organisation takes the extremely bold step in publicly stating their attention to CSR, they not only commit themselves, but also set stringent future targets to benefit the society. British Standards Institution (BSI) has assured the Report. Speaking on the occasion Mr Venkataram Arabolu, Managing Director said that Dalmia Bharat Group efforts in using & institutionalising Management Standards such as ISO 26000 is commendable as adopting them not only makes them robust but also sets another benchmark for the Industry as being socially responsible, the mark of a true leader.

Dalmia Bharat Limited has been a leader in cement manufacturing since 1939. Since inception the company has incrementally and consistently adopted an approach to business which is Inclusive and nurturing towards people (employees and communities in which it operates), is sensitive to the environment, driven by efficiency, pursuit of excellence and quality and robust corporate governance.
The company’s CSR initiatives have been identified with a multi-stakeholder approach and taking into account the material issues to the company and the community. The company is implementing its CSR through an independent foundation, Dalmia Bharat Foundation, focusing on Soil and Water Conservation, Access to Clean Energy and Livelihood Skill Training. The company is reaching out to 1300 villages and approximately 10 Lakh people. The company’s CSR is very closely aligned to the UN SDG’s and also national campaigns.

About Dalmia Bharat Group: Dalmia Bharat Group (www.dalmiabharat.com) is a prominent player in India’s core manufacturing sector since 1935, with a national footprint. With a turnover of over 10,000 crore it has a strong presence in Cement, Sugar, Refractories. A greenest cement company in the world with the lowest carbon footprint. A leader in specialty cements and the country’s largest producer of slag cement, Dalmia Bharat has a significant presence in generic sugar, catering to several marquee brands. The Group also caters to an enduring and growing customer base in refractories and has forayed into sustainable power/energy.