South Point is the first school in eastern India to be awarded the Occupational Health and Safety Management (BS OHSAS 18001) Certification. The two schools, run by South Point Education Society, are housed in two buildings in Ballygunje area of Kolkata city.

"With the implementation of the system, over 12,000 families are secure that their children are safe," South Point Education Society Trustee Krishna Damani said.

He said an BS OHSAS 18001 implementation team comprising members of administrative, teaching and other support staff was formed in the school to implement BS OHSAS 18001 requirements. The team, with the supported of a reputed consultant practised a process-based approach to identify the various hazards and risks associated with daily school activities and documented safe operational control procedures to be adopted.

Emergency response teams were formed in both sections involving a cross-section of school staff, who were trained on fire fighting, quake management, quick response during any terror threat and first aid measures. 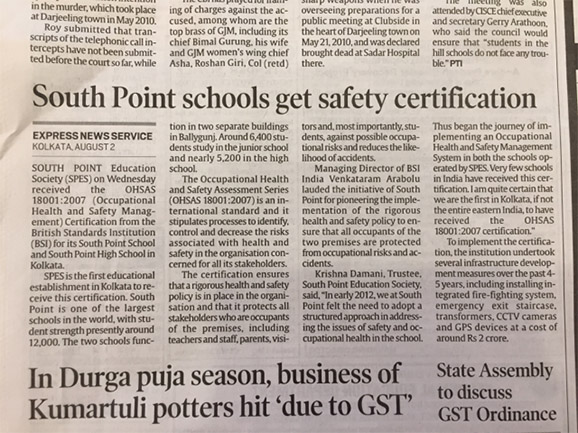 Above is an article in Indian Express on 02 August 2017 edition in Kolkata.