We’ve now updated the influential British Standard on the design of intruder and hold-up alarm systems. This blog post recounts what’s in the standard, why it matters and what’s new about the 2021 version.

What makes BS 8243 important is that it recognizes the risk of false alarms, which are often due to the incorrect configuration of alarm systems or a number of other common mistakes. The standard therefore incorporates alarm confirmation technology, addresses a number of areas identified as causing false alarms, gives recommendations intended to minimize the likelihood of false alarms and places restrictions on system design to avoid them. It also describes methods by which alarms can be confirmed.

The rules set out in BS 8243 say that confirmation can be achieved in various ways, for example by use of detection devices plus microphones (“audio” confirmation) or cameras (“visual” confirmation). But the most commonly used method is called “sequential” confirmation.

Simply put, this requires two alarm activations to be received at the alarm receiving centre (ARC) within defined periods of time, before they can ask the police to attend. If only one activation is received, it’s referred to as an “unconfirmed” activation. In these circumstances only keyholders will be notified and, depending on the wording of the insurer’s policy condition, they may be required to attend the premises and investigate the cause of the activation.

Moreover, any installed alarm system where a police response is required by the specifiers or insurance company must comply with BS 8243.

Last amended in 2014, BS 8243 was due for a regular systematic review and it was decided that the standard merited a full revision, both to update it and to address a specific industry concern. It was thought that content giving recommendations on the handling of alarms by ARCs would be better placed in a standard dedicated to ARCs. It was anticipated that this would be BS 8591, but in the event this standard has been replaced by the new BS 9518, Processing of alarm signals by an alarm receiving centre - Code of practice which now includes the ARC content previously in Clause 7 of BS 8243.

Other principal changes include that previous provision for all I&HAS to include sequential confirmation is now optional; and a number of prescriptive measures in the clause on recommendations for the design of audio or visual confirmation have been removed.

In addition, the revising panel has also removed the provision to declare to the response authority when using detectors incorporating two movement detectors of the same technology within a single housing. Confirmation of hold-up alarm (HUA) by telephone call back by an ARC is now permitted only for residential premises. As well, confirmation procedures have changed to accommodate the different processes relating to sequential confirmation or where the confirmation status is decided at an ARC. Finally the panel has added an option to set/unset the intruder alarm system (IAS) using a remote device.

These changes ensure that BS 8342 keeps pace with current technology and industry practice. They also ensure that BS 8243 will remain an authoritative and trusted standard both by the security industry and its clients, and by police authorities. 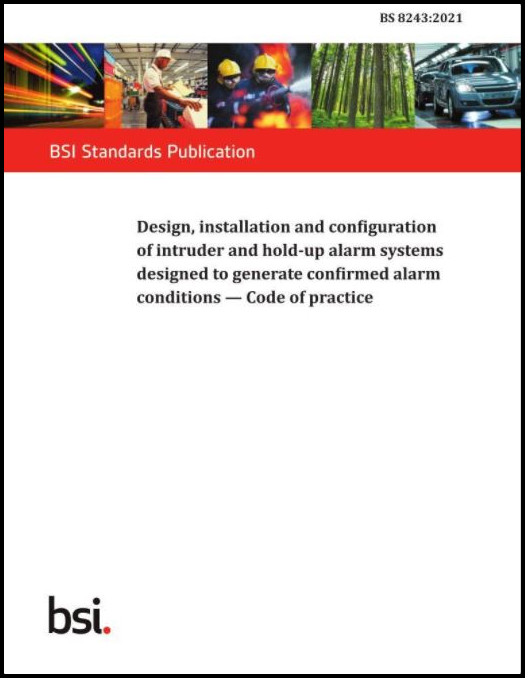